England’s Justin Rose birdied the final three holes of his round to post a six under par 65 and lead the U.S. Open by one shot. One of GolfPunk’s tips, Ricky Fowler, sits in second place alongside his fellow countrymen, Xander Schauffele and Aaron Wise, and South Africa’s Louis Oosthuizen. Rose’s round is the joint lowest ever shot at Pebble Beach in an U.S. Open. 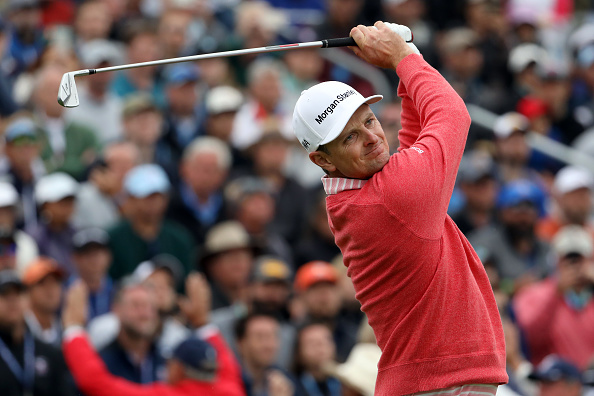 Rose’s playing partner Tiger Woods is the other player to shoot 65 around this famous course. Woods found it tougher going and did well to scramble to a one under par 70. A wild tee shot at par three fifth cost Tiger a double bogey and this is the only hole on which he dropped shots with a number of par saves.

Before the great finishing run of birdies Rose had birdied the 4th, eagled the par five 6th and birdied the 7th to sit on four under.  The only slip up came at the 8th but a bogey was then followed by seven straight pars before Rose finished in style.

The nearly man Ricky Fowler was the long time clubhouse leader following his opening 66. It would be a very popular win and enable Fowler to get the monkey off his back concerning the lack of major success.  "I said earlier in the week that whether I win a major or I don't in my career, it's not something that's going to define me," said the likeable American.

Northern Ireland’s Rory McIlroy is three off the lead after a first round 68 which included a bogie at his opening hole. McIlroy came into the event as the bookies favourite following his win last week in Canada but it is 5 years since his mast major victory. Starting early McIlroy arguably had the best of the conditions and was please with his opening round.

"I did what I wanted to do, which was hit it in the fairways for the most part, hit a lot of greens and when I didn’t, I was able to get it up and down," he told reporters after his round.

World number one Brooks Koepka, who is looking to be only the second player to win three successive U.S. Opens and the first for some one hundred and fourteen years (Willie Anderson won from 1903 to 1905) is sitting on two under par. Koepka struggled off the tee but his putter came to the rescue. "I felt the most comfortable on the greens this week of all the majors we've played so far.” Said Kopeka.

Our man Gmac, who won the U.S. Open the last time it was staged at Pebble Beach in 2010, was another early starter. He posted a bogey-free round of 69 and sits on two under alongside England’s Matthew Fitzpatrick. One stroke back are a trio of Englishmen Paul Casey, Matt Wallace and Tyrrell Hatton.

Open champion, Francesco Molinari, birdied the last for an encouraging opening 68 a mark he shares with Sweden’s Henrik Stenson who birdied four of his last five holes.