European Captain Padraig Harrington has named Robert Karlsson as his first vice captain for The 2020 Ryder Cup against the United States at Whistling Straits in Wisconsin next September. Karlsson twice played in the Ryder Cup, in the victorious 2006 team that crushed the USA at the K Club and on the losing side two years later at Valhalla. 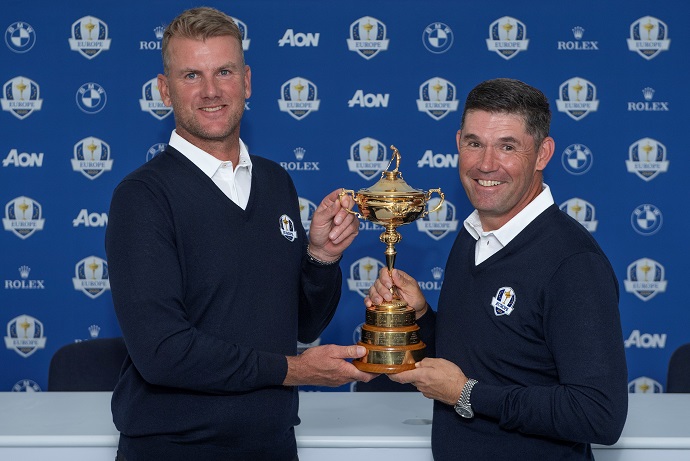 The 50 year-old Swede partnered Harrington in both foursomes sessions at the 2008 Ryder Cup and brings a wealth of experience. His plaving career spanned some thirty years and he won eleven times on the European Tour. Karlsson won the Harry Vardon Trophy as The European Tour’s Number One player in 2008, becoming the first Swede to achieve that honour.

Harrington, who made the announcement ahead of the BMW PGA Championship at Ryder Cup Europe’s headquarters, Wentworth Golf Club, said: “Robert was an obvious choice for my first vice captain having seen his notable contribution to the backroom team last year in Paris, particularly with his attention to detail and his analytical approach.

“I have known Robert for many years and I know he will bring a wealth of experience to the team. As a former Ryder Cup player and European Tour Number One, he commands the respect of his peers and I know I can count on him both in the build-up to Whistling Straits and during the week itself.”

Karlsson said: “It is an honour to be asked to be a Vice Captain by Padraig, someone I have known and respected in the game for many years, and I’m really looking forward to playing my part for Team Europe once again over the next 12 months.

“To be involved in what transpired at Le Golf National was a dream come true and I believe the experience and continuity I can bring to the team this time around can be a big help as we aim to retain the trophy on American soil.”

The qualification campaign for The 2020 Ryder Cup begins this week and will conclude in a year’s time back at Wentworth at the 2020 BMW PGA Championship.

The 2020 Ryder Cup will be played at Whistling Straits Golf Club in Wisconsin from 25th to 27th September, 2020; the Pete and Alice Dye-designed course which sits along a two-mile stretch of Lake Michigan. It has been a host venue of three US PGA Championships, most recently in 2015 when Australian Jason Day triumphed.

Europe will travel to Wisconsin as holders of The Ryder Cup following their 17½-10½ victory over the United States at Le Golf National last September. It was Europe’s ninth victory in the last 12 contests.