Everyone loves Beef Johnson, what’s not to like? He is a lovely chap and is nice to everyone both on and off the course and boy can he play golf. That’s why it was sad to see Beef’s loss of form and subsequently learn that this great bloke from London was struggling mentally. In this, Men’s Mental Health Month, we really enjoyed watching the video of Beef and Tubes, the Soccer AM presenter, playing a few holes and chatting about mental health and other stuff. 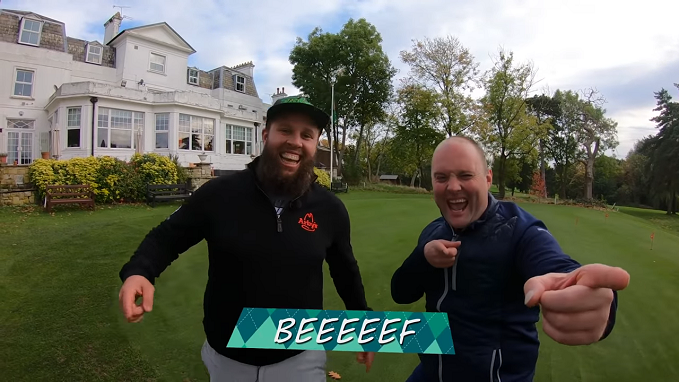 For those of you who don’t know Soccer AM, it is a very long running Saturday morning show on Sky TV in the UK which is all about, well soccer, and who can forget the Soccerettes! Tubes, whose real name Peter Dale, is a stalwart of the programme and has himself struggles with his own issues. Tubes admitted publicly to being an alcoholic in Jan 2018 and that same month suffered a major heart attack.

In the interview, Beef and Tubes discuss the importance of opening up about mental health, and how it changed both of their lives for the better by doing so. Depression and anxiety are indiscriminate and can affect anybody at any time and so its important that people speak up and seek help if in need.

As Beef says “But it’s very important if you’re having problems – speak about it. Big time.”

Check out the video which is a good watch and Beef doesn’t just talk about his mental health issues. We learn where the name Beef came from (you’ll be surprised), the misery that goes with supporting Arsenal football club and how Henrik Stenson is one of the funniest guys on tour.

For those of you who can't watch the video on your device here is a transcript of some of the best bits.

It has been well documented that you have had your struggles with mental health; how are you now?

Yeah, good. Definitely speaking about it has really helped and I’ve always said it how it is anyway, so the reason I took time off earlier in the season was because I wasn’t myself. It wasn’t affecting me when I was away from the golf course, I was fine, but as soon as I stepped back on to the golf course or thought about tournaments, the anxiety and the worry about golf tournaments, I couldn’t play. So I pulled out of a load of golf tournaments last minute, I don’t know why but I just couldn’t be there. I think not knowing why, was frustrating me the most about it. Then it kind of played on my mind. My fiancée Jodie and helped me, and she found a psychologist and once I started to work with him, things just began to make sense after a while. I didn’t realise after 2016, going to America in 2017 with the build-up and the amount of pressure that I put on myself was just crazy. I was expecting to go there and just win tournaments and you’re thinking ‘if you don’t, people aren’t gonna like you’. So much pressure.

Then I came back after about five months and played at Wentworth and finished around 20th, 20th at The Scottish Open, mid 20s at The British Open, and I walked off the course every time just thinking ‘Another crap week. Another bad week. Not good enough’, and all of a sudden, my mindset had changed. They were good weeks and it was only a couple of shots for a top 10 in some of the best fields that you’re going to play with the best players. So really, they’re good weeks, but I was looking at it like another bad week. I had a lot of change last year, a change of coach as well and after all then all of a sudden I was like ‘What’s going on here, everything has just changed’, and I just couldn’t understand why. When you dig into it and think it’s all that pressure, it makes sense now, why I was feeling like that. The pressure you put on yourself never goes because that’s the nature of sport, you want to compete, you want to win tournaments. I was worried about what people think, I felt like I fell massively in America, so all of a sudden that mindset just changed and I was just beating myself up slowly over a period of a year and a half without even realising.

I wasn’t myself on the golf course, I was miserable, I was angry, I didn’t want to be involved with the crowd, I just wanted to get away from it. Away from the course I was fine, we could go out and have fun, go for dinner, whatever – fine. As soon as I started thinking about golf and even building up to a tournament, I just wanted to smash something and I was angry already before I even went to the tournament.

On a serious note, I’ve been through it before. I had it when my dad died. My dad died a few years back, and for a year I was fine, looking after my mum, my brother, and then all of a sudden I got the post traumatic stress and depression and it’s horrible; you feel worthless don’t you, you’re not good enough, people don’t like you, and I know exactly what you’re saying. But I turned to alcohol.

That’s the thing, it’s hard to say stuff, and I didn’t say stuff for ages.

But that’s what men do isn’t it? I wouldn’t say anything, I would just go and get a bottle of vodka and get absolutely smashed. Because I didn’t talk, no-one knew.

And then it has a knock-on effect because they think you’re having fun because you’re hammered, and obviously of you being that funny character all the time, people come up to you expecting that to be you, but ideally you want to get away and people have no idea of what’s going through someone’s head.

But it’s very important if you’re having problems – speak about it. Big time.

I think the majority of people, no matter what they do in life, go through something like that. It doesn’t matter what you do, who you are, no matter how successful you are, it can happen to anyone.

Why are you called Beef?

I think I was walking up this very hole and my friend was walking down the hole over there, and I had a big head of curly hair, I must have been about 12. I walked over because there’s water there and you have to walk across the bridge and he came over and walked past and said ‘Look at you and your big head. You’ve got a big bit of beef on your head. You’ve got a beef-head!’, one of my good mates and that was it. He just called me beef-head, then told everyone, got shortened to Beef and that was it.

So the beard has absolutely nothing to do with you being called Beef?

Absolutely nothing, no. The thing with the beard was that I played a lot of tournaments in 2015 and it was quite long – I wouldn’t say it was at a beard stage at that point. A few of the players and caddies made a few passing comments, so I was going to leave it over Christmas, come back in the dessert and there’s gonna be another two and a half months of growth in there and see what people say. Thomas Bjorn was one of them and I saw him coming, I was on the putting green and I saw him coming over so I shoved a load of tees in my beard, and he walked up and looked at me and just said ‘What the f*ck is that!’, and I knew I was going to get a good reaction off him and only did it as a bit of a joke. Then after I won in Spain, I had a few funny comments from it saying 'your beard is a bad imagine for golf’, so I said you know what, I’m going to keep it now. It made my mind up.

How is it a bad image for golf?

No idea. It just doesn’t make any sense. I was like I’m not going to listen to anyone, and it just stuck. It’s conditioned, moisturised, whatever the barber gives me.

If all the golfers had a fight, who’s coming out on top? Who is the hardest golfer?

I think Scott Hend has a temper on him, you wouldn’t want to cross. I wouldn’t wind him up! I’ve heard Ernie back in the day, again don’t cross him. Big dude as well. I think he’s one of them, very chilled but push the wrong button… don’t mess!

I’ve seen you at the gym – you can lift some serious weight!

Yeh, I enjoy it! The problem is, enjoying the gym and enjoying food, one outweighs the other… I do enjoy it and I try and keep on top of it, keep training, always want to learn so that I can hit the ball a bit further and stay injury free, but it’s one of the things that I find really had to do. I went through a big training session last year for about eight weeks, and I was probably hitting it about 10 yards further, but it’s maintaining it whilst I’m away. I don’t want to be lifting those weights during tournaments, and everything starts feeling different, and I lose that feel and comfort when I play, so I’m always trying to find a balance when I’m playing.

You’re known as a joker, who else would you take out on a night out for a laugh out of the golfers?

Stenson’s good, very dry sense of humour but he’s good, always have a laugh with him. He’s good value. I don’t know if you saw there was an exchange between him and Tiger, and Tiger said ‘Henrik thinks he’s the funniest on tour, but he’s not’, and then Henrik wrote back saying ‘Well the reason that you’ve had so many injuries is from laughing at all of my jokes’, and just got him straight back like that and that’s what he’s like, he’s quick and funny’.

Beef, you’re a massive Arsenal fan, what have you made of it this season?

Shambles really! I thought Emery did a decent job last season, I know they had a poor finish, but I thought that’s alright if they buy a few players, it’s more his team, and they just seem to have got worse this season. I know it’s early on but again, spending money in the wrong places. Although Pepe might become a great player, I thought surely they need a good midfielder and a good defender first. That’s what seems to happen there – spend in the wrong place and still can’t defend. It’s strange. I think it’s too soon to get Emery out, but you have to see what happens during the course of the season. It’s early, but it’s strange, it’s not right there, but I think it goes all the way through, past the manager into the owners as well so I think there’s a lot more behind it. But Arsenal are not in a good place at the moment.

Why did you become an Arsenal fan?

Ian Wright was the reason that I supported Arsenal. Funny enough, my dad was a Tottenham fan. It was of because of watching Ian Wright as a kid, I just loved watching him play and the big smile that he had on his face, I just instantly took to him and he played for Arsenal, so that was it – I became an Arsenal fan! 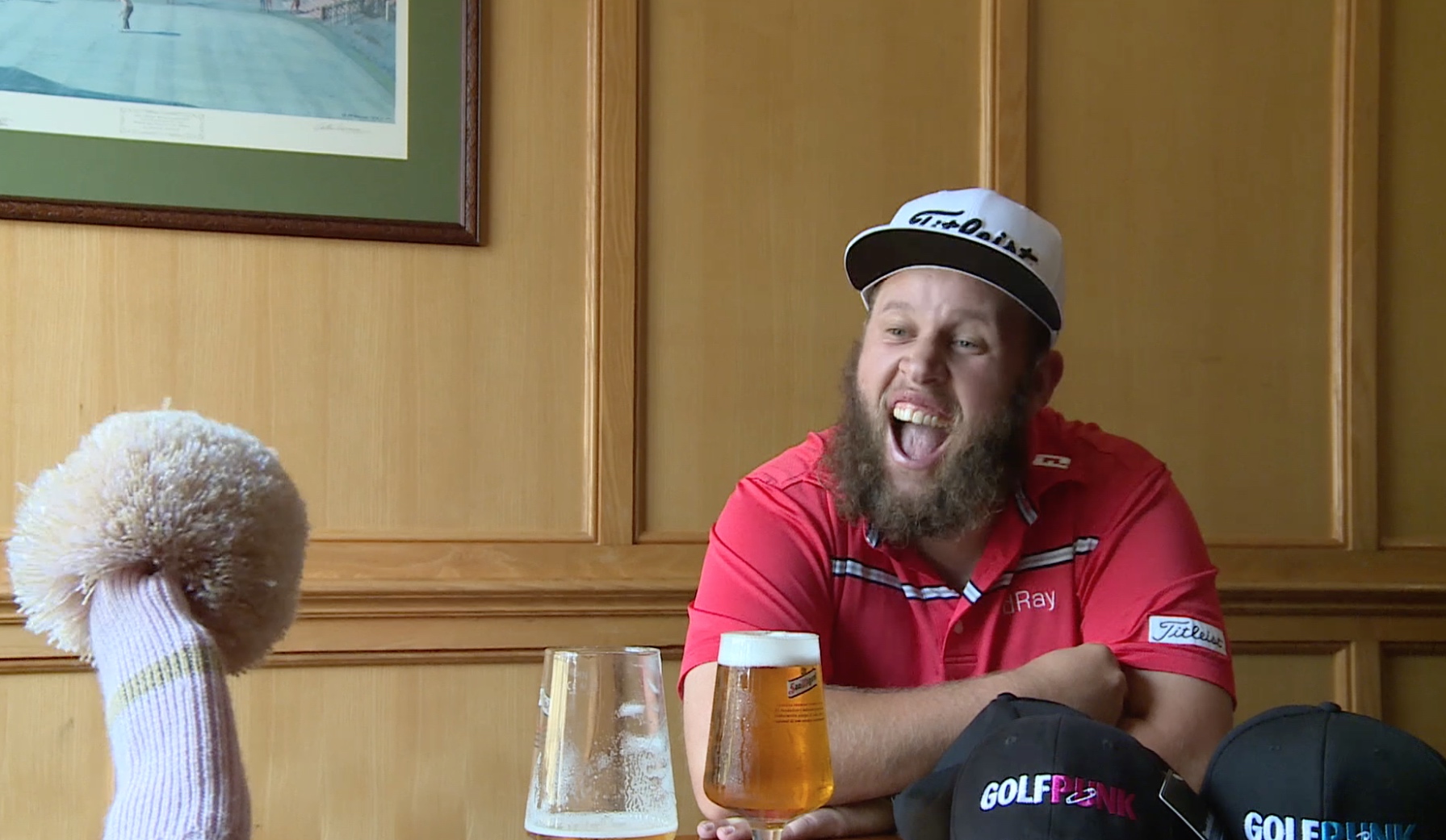