Matt Fitzpatrick’s little brother, Alex, led the way for team Great Britain and Ireland at Royal Liverpool yesterday. Following a foursomes win in the morning, with partner Conor Purcell, Fitzpatrick took out world number one amateur Cole Hammer (great name!) in the top afternoon singles game to help The GB&I team to a 7-5 lead after day one. 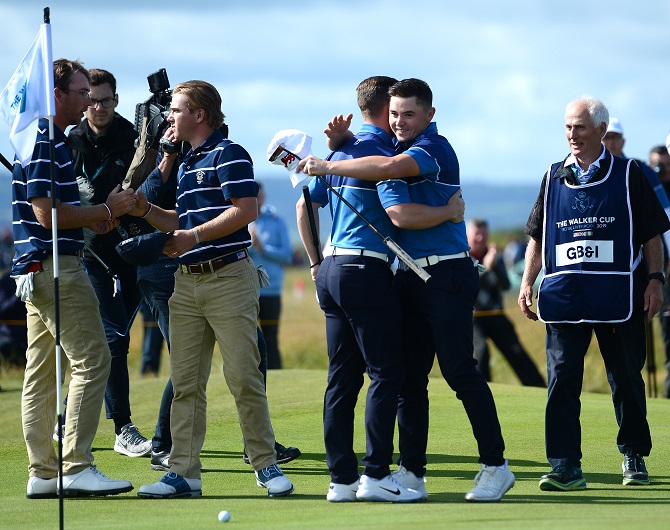 The two teams shared the morning foursomes with the all-English pairing of Conor Gough and Harry Hall adding to the point won by Fitzpatrick and Purcell. John Pak and Isaiah Salinda of team USA came back from behind to beat the Scottish duo of Euan Walker and Sandy Scott. The GB&I pairing had started strongly but lost their way on the back nine going down 2&1.

In the final foursomes Alex Smalley and Brandon Wu of the USA never really looked in trouble in their match against Thomas Plumb and Tom Sloman. 2-up  through ten, the Americans dropped a hole at the 12th but a birdie on the 15th restored their two hole lead and they never looked back as they saw out the match 2&1 giving team USA its second point.

In the afternoon singles Fitzpatrick got off to an awful start and was two down after three. However, the 20-year-old Englishman recovered with birdies at the 4th and 6th holes to level the match. Following wins at the 14th and 15th Fitzpatrick was two up with three to play and despite a birdie from Hammer at the 16th the point went to GB&I.

Euan Walker extended team GB&I’s lead to two after beating Steven Fisk. Fisk had been rested in the morning but the Scotsman was never behind in his match, sealing a 2 up victory on the last.

John Augenstein hit back for team USA with a 2&1 win over Conor Purcell taking it to 4-3 in the match overall. Augenstein, the US Amateur runner-up, always looked comfortable and a par at the 17th was enough to record the first point of the afternoon for the USA.

Sandy Scott then took out the US Amateur champion Andy Ogletree after a thrilling affair which saw the young Scotsman fire six birdies, finally seeing off the American with a par at the last for an important 1 up victory.

John Pak and Brandon Wu levelled up the match, with Pak defeating Amateur champion James Sugrue by a single hole and Wu easing to victory over Tom Sloman 4&2.

With two matches left out on the course, Caolan Rafferty regained the lead for the home side with a 2&1 win over Alez Smalley and Conor Gough grabbed his second point of the day, beating Isaiah Salinda by two holes, to leave Craig Watson’s s GB&I side with a two point lead going into day two.

Sandy Scott vs. Andy Ogletree (GB&I wins by one hole)

James Sugrue vs. John Pak (USA wins by one hole)