Local favourite Stephanie Meadow will take a four shot lead into the final round of the ISPS HANDA World Invitational. The 27-year-old from Jordanstown, Northern Ireland shot a six under par 67 to sit on ten under for the event, four clear of England’s Eleanor Givens. In the men’s event, Damien Perrier of France and Todd Clement of England lead the field by a single shot following another long day with rain delays at Galgorm Castle. 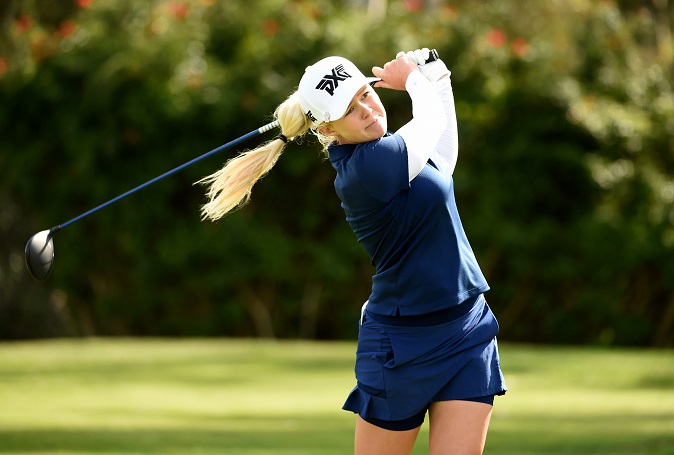 Meadow is on course to deliver another Irish win of the summer and has done well to handle the pressure of being the hope of the Irish crowd. After a solid front nine, consisting of three birdies and a sole bogey at the 2nd hole, Meadow produced four birdies in five holes from the turn to go clear at the top of the leaderboard.

First round leader Givens produced a three under 67 to sit four shots behind Meadow with England's Charley Hull and another Irishwoman, Leona Maguire, in a group five back from the leader.

The Jordanstown woman has not really lived up to her early promise after starring at the University of Alabama and announcing herself on to the professional scene when coming third in her debut event, the 2014 U.S. Women's Open. Her most recent success being a win at the IOA Championship on the Symetra Tour in 2018. A sixth placed finish on the Symetra tour saw her gain her LPGA Tour Card for 2019.

"I don't plan to do anything different tomorrow, just go out there and try and make as many birdies as I can," said the LPGA tour player after her round.

Solheim Cup team member Charley Hull had a rollercoaster round of 68 which consisted of nine birdies, two bogeys and a double bogey. If she can eradicate the errors in today’s round she well may make a charge on Meadow’s lead.

Todd Clement had been the overnight leader in the men’s event and a battling round in tricky conditions, closing with two birdies, left him in a share of the lead with Damien Perrier of France. Perrier had five birdies and a solitary bogey, at the par three 7th, in his round of 66.

Round of the day came from Jacob Glennemo of Sweden who had an error free six under par round of 66. This moved the Swede, who had only just made the cut on Friday, up the leaderboard to sit only five back of the leaders.

The leaders are one ahead of Italy's Francesco Laporta and England's Jack Senior, with fellow Englishman Jordan Wrisdale three back. Last year's Northern Ireland Open winner, Scotland's Calum Hill, slipped back but is still in a group four behind.

The men and women are in alternate groupings for the final round of the event and so the crowd will be treated to the excitement of two finishes to decide the men and women’s winners.

How to speed up the PGA Tour