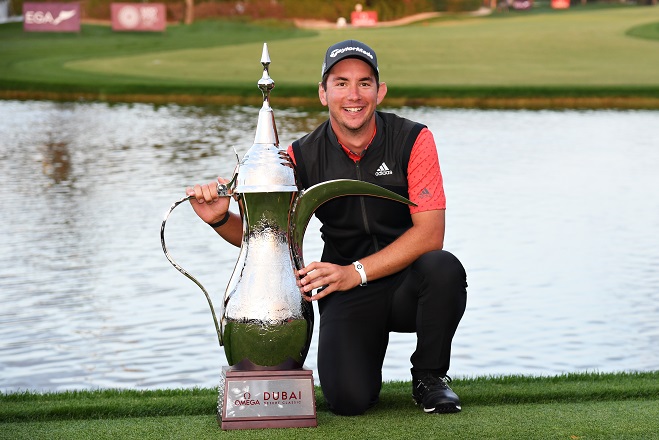 Australia’s Lucas Herbert miraculously recovered from the ‘worst shot his life’ to win the Omega Dubai Desert Classic and his maiden European Tour victory at the second playoff hole from Christiaan Bezuidenhout of South Africa. It was a tough day for the leaders as the winds got up and scoring became difficult on an already tricky course.

The duo entered the final day six shots off the lead but with strong winds and showers at Emirates Golf Club, the leaderboard was blown wide open.

Bezuidenhout and Herbert both fired brilliant rounds of 68 to get to nine under par, with the South African finding water after laying up on the last and making a clutch putt for bogey, while Herbert birdied the 17th and 18th.

It was the Australian who found the water with his second on the first play-off hole before saving par thanks to a stunning shot from the drop zone to take it back to the tee.

His second shot next time around could not have been more different, as he got within 20 feet and a two putt birdie handed him the title, and second position in the Race to Dubai Rankings.

Defending champion Bryson DeChambeau’s challenge ironically unravelled after a warning for slow play. The American was in a tie for the lead with four to go but a quartet of bogies saw him drop down into a tie for eighth. 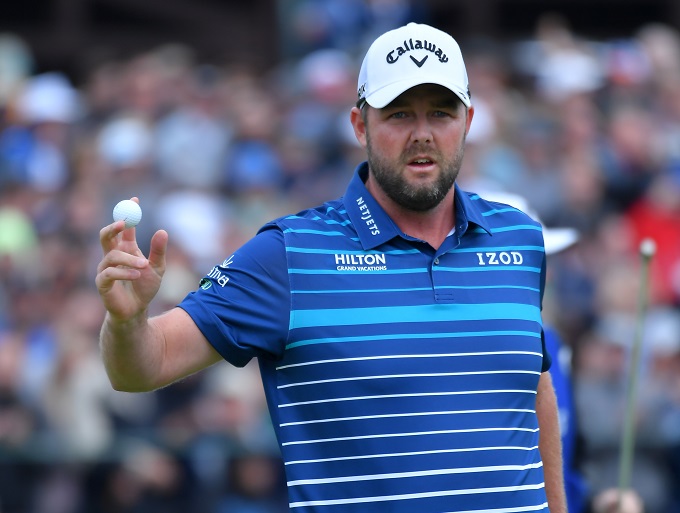 Australian Marc Leishman made it a glorious double for Australia on Australia Day posting a seven-under 65 to secure his fifth PGA Tour title with a one-shot win in the Farmers Insurance Open at Torrey Pines. Compatriot Lucas Herbert's had taken victory at the European Tour's Dubai Desert Classic earlier in the day.

The 36-year-old world number 28 was four behind overnight leader Jon Rahm but carded eight birdies and just a single dropped shot in his round to finish on 15 under par.

Rahm had an awful start to his final round, dropping four shots in his first five holes. He recovered well, with a storming back nine of 31 which included an eagle and four birdies in the last six holes.  He needed to eagle the last to tie Leishman and found the edge of the green at the par-five 18th in two. His effort from some sixty feet finished agonisingly inches short of the hole.

Rory McIlroy, who was looking to regain the world top spot was another poor starter. The Northern Irishman dropped three shots in his first four holes and although he recovered with three birdies and an eagle in his next five, he could not find any consistency on the back nine. A final round three-under 69 left him three off the lead in tied third alongside America’s Brandt Snedeker.

Tiger Woods in his first outing of 2020 closed with a 70 to finish in a tie for ninth, six back from the winner. He must wait for another day to grab that record 83rd tour win and move out of the tie with Sam Snead. 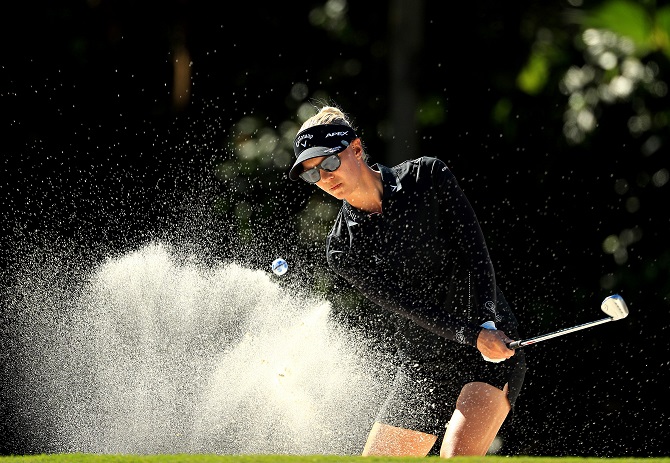 Sweden’s Madelene Sagstrom won the Gainbridge LPGA at Boca Rio on Sunday to take her first LPGA Tour title. The 27-year-old won by a single shot after  Nasa Hataoka of Japan agonisingly missed a three foot putt on the last to take the event to extra holes.

Sagstrom finished with a 2-under par 70 for a 17-under total at a rather damp Boca Rio Golf Club.

Hataoka who closed with a three-under 69 had led the field after birdies at the 15th and 16th holes but saw the Swede join her at the top of the leaderboard when she birdied the 17th. She was philosophical after bogeying the final and missing ‘that’ putt.

"Missing the win gives me more motivation to keep on going for the next many tournaments coming," Hataoka said.

Sagstrom stumbled at the beginning of her final round, bogeying two of the first five holes, before fighting back with birdies around the turn on holes 8, 10 and 11.

"It doesn't matter how you start," Sagstrom said. "If you just continue fighting, things can go your way. And I just told myself, `Keep fighting, keep fighting.'"

The Swede who came alive with a career-best 62 on Friday took a two-shot lead into the final round grabbed her first LPGA title at the sixty-ninth time of asking and is the twelfth Swede to have won on tour.

Danielle Kang finished alone in third on 15 under after a closing 69. She could not buy a birdie on the back nine parring all of her final eight holes.

France’s Celine Boutier shot 70 to grab fourth spot on 13 under with Sei Young Kim a further two shots back. 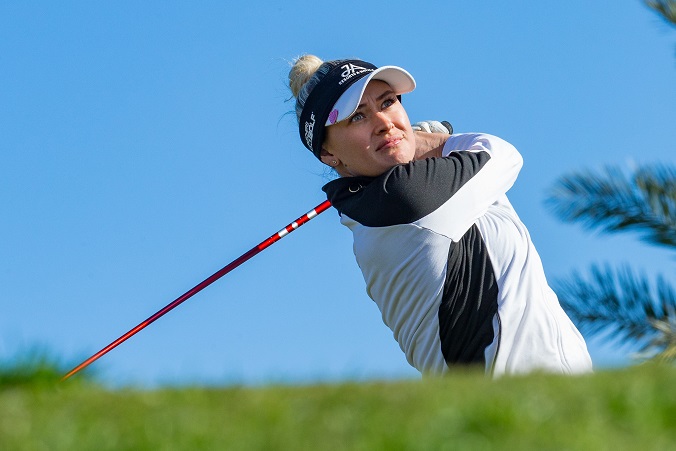 Amy Boulden will return to the Ladies European Tour in 2020 after winning Qualifying School at La Manga Club by three strokes from Magdalena Simmermacher and Alison Muirhead.

The 26-year-old from Llandudno in Wales, whose career best finish in six years on tour was second in the 2014 Lacoste Ladies Open de France, had set a personal target of 12-under-par for the marathon examination, but was happy with her score, especially after a week of changeable and challenging weather conditions.

She said: “I’m relieved. It’s always a tough week coming back to Q-School. I decided to play a bit on the Symetra Tour last year and didn’t manage to keep my LET card from the six events in which I played, so I was always planning to come back. I love playing in Europe, but you feel a bit of extra pressure once you’ve had your card and then lose it. It’s a big relief to have it.

“I’ve done quite a lot of swing work over the last year or so and I didn’t actually feel like I had my game today. I know I shot a good score but my iron-play wasn’t quite there. I putted well and I feel like all areas of my game are getting better and it’s just about confidence now. Hopefully I can kick on from here.”

Simmermacher, 23, from Buenos Aires, will become the second Argentinian member of the LET after sealing second spot, based on the best last 18 holes, with her final round of 68.

The 2019 LET Access Series player said: “I can’t believe it. I hit the ball well all week. Every single part of my game was good and I just kept trusting it. It’s really exciting that I’m going to play a full season.”

Muirhead, who topped the field in Pre-Qualifying at La Manga, which was her first tournament as professional, ended with a 71 to take the third card. The 21-year-old Scot, who lives in Dubai, said: “It feels amazing. I never expected this to be the outcome. To do last week and this week and finish first and second, I’m really pleased. It’s been a long two weeks and I’m excited for the tour and feel like I’m ready to be playing. Today, I didn’t have my A game, but I kept it together and sunk some big putts, which gave me a lot of confidence coming into the last five holes. Amy played spectacularly and it was amazing to watch and be part of it.”

Switzerland’s Kim Metraux, whose sister, Morgane, qualified in 14th spot, finished fourth on six-under-par after a closing 69 and said that she had come to Q-School without expectations.

“I have a status on the Symetra Tour, which gave me some relief that I knew I could play next year no matter what. It was good to be stress-free and I was quite relaxed during the round and focused on my game. It’s great to know that my sister qualified, too.”

Alice Hewson (69) from Hertfordshire in England took the final spot in Category 5c in fifth place on five-under-par.

Smit secured the 20th card with a birdie four on the second extra hole after a four-way play-off on the 18th against Manon Gidali from France, Leonie Harm from Germany and Mireia Prat from Spain.

The 2020 season gets under way on February 20 with the Australian Ladies Classic Bonville in New South Wales.