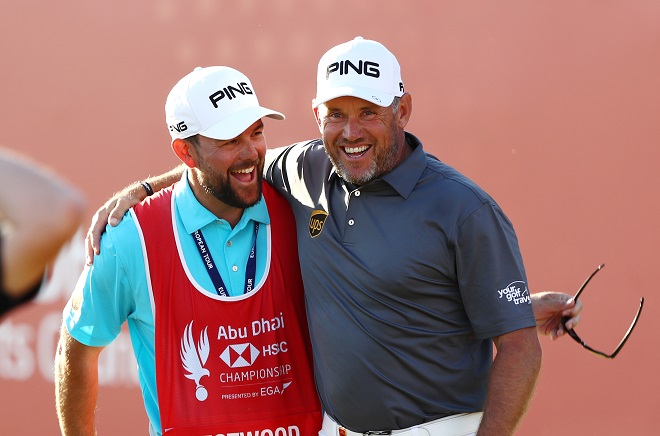 We're in the money!

Lee Westwood shot an excellent final round 67 to clinch the Abu Dhabi HSBC Championship by two shots from Tommy Fleetwood, Matthew Fitzpatrick and Victor Perez. It was Westwood’s 44th tour win, his 25th on the European Tour, and the 46-year-old from England can now boast that he has won a European title in each of the last four decades.

The veteran Englishman entered the final round one shot ahead of the pack and although he was briefly caught, he never relinquished the lead. Westwood showed flashes of his heydays, when he topped the world rankings, in holding off the charge of players almost half his age.

Both Fleetwood, who was celebrating his 29th birthday and Perez, the 2019 Alfred Dunhill Links Championship winner, stormed through the field with a final round 9-under-par 63s but neither could catch Westwood.

Five-time European Tour winner Fitzpatrick shot a bogey-free round of 67 but the day belonged to Westwood, a man who won his first European Tour event almost 24 years ago, the 1996 Volvo Scandinavian Masters.

“I was trying not to look at leaderboards. I peeked at a few on the way around the back nine and I could see that Victor shot nine-under and Tommy had shot nine-under and finished 17 under. Bogeyed 16, but it was a nice, solid birdie at the last and hit two good shots on 17, as well. Some quality golf.”

The win drew a message of congratulations from Sir Nick Faldo. “Congrats, Lee,” Faldo wrote. “Must be a great feeling knowing you can still beat the youngsters half your age!”

The win takes Westwood into the top 30 in the world and he must now have one eye on the Ryder Cup in the summer.

When asked about a possibility of matching Nick Faldo’s record with an 11th Ryder Cup appearance the man from Worksop had the following to say “I don’t want a wildcard pick for Whistling Straits in September, but would definitely play if I qualified by right,” Westwood said. “To be honest, I thought I was done in the Ryder Cup as a player. I've played 10, and I really enjoyed watching everybody else suffer in the last one. But, yes, I would love to play another Ryder Cup, so long as I'm good enough.” 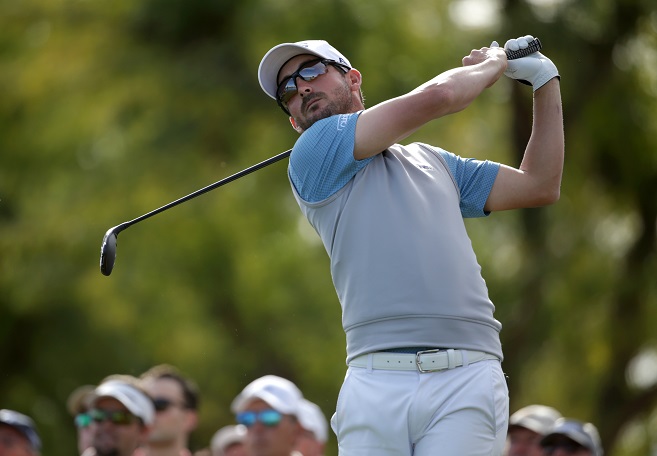 Andrew Landry nearly blew it coming down the stretch on Sunday afternoon in The American Express at PGA West Stadium Course. Leading by six shots at one point the American had to regroup and finished with two fine birdies to see off the challenge of Abraham Ancer.

"That was probably the shot of the tournament for me," Landry said about the 17th where he hit it to eight feet. "Just to be able to go over there and, to that right hole location, and just hold one up and hit a good distance and have a 7-, 8-footer to look at. ... Thankfully, it went in and kind of made 18 a little bit easier."

It was a turnaround in form for Landry who had missed seven cuts in his last eight tournaments. This is the 32-year-old from Texans' second PGA Tour, he won the Texas Open back in 2018.

Ancer who was looking to become the third Mexican winner in PGA Tour history and the first since 1978, has a scintillating final round, matching the Stadium Course record with a 63.

Talking after the round Ancer commented: "All week, really, I hit the ball great off the tee and iron shots, and in the first three rounds, I feel like I didn't score as low as I should have for how good I hit the ball. But stayed patient and today the putts started to fall in."

Landry looked like he was cruising to victory when he birdied three holes on the spin from the 10th tee to open up a six-shot lead. However, he inexplicably then bogeyed the next three holes as  Ancer who was playing two groups ahead of the leader made birdies on the 16th and 17th and suddenly that lead had evaporated.

When asked about how he felt walking to the 17th tee Landry said: "I just kind of calmed myself down and said, 'Hey, look, these are two holes that we can go out and get, they suit my game very well, especially 18."

Landry had shared the third-round lead with Scottie Scheffler four strokes ahead of third-place Rickie Fowler. However, Scheffler got off to a poor start bogeying the opening hole and was never really in the hunt despite finishing alone in third and only three shots off the lead on 23-under-par.

Ricky Fowler saw the field sweep past him as he could only post a 71 in his final round, he would eventually finish in a tie for tenth. 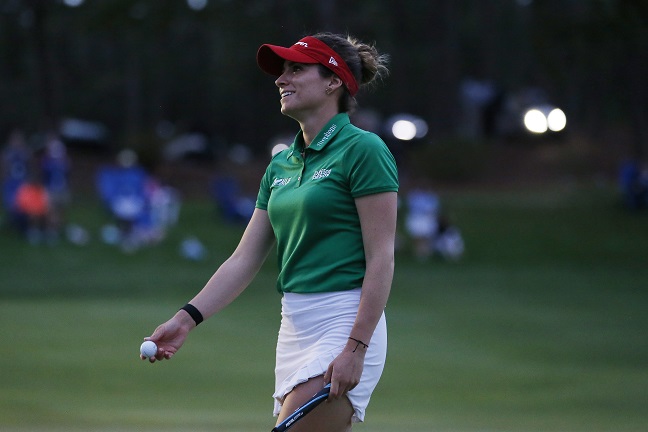 Inbee Park, who was looking for her 20th LPGA Tour teed off on Sunday with a two-shot lead but a disappointing final round, even-par 71 saw her fall back into a play-off with Japan’s Nasa Hataoka  and Mexico’s Gaby Lopez who shots rounds of 68 and 66 respectively, all three ending on the 13-under total of 271.

Sadly, for the 31-year-old Park, she was eliminated at the third extra hole after finding water off the tee at the par-three 18th. Lopez, wearing the red and green colours of her homeland and Hataoka got up-and-down for their pars, eliminating Park and moving on to the fourth extra hole.

The play was halted when Lopez and the 21-year-old Hataoka still could not be separated after the fifth extra hole, and after it was called too dark to continue. Both players will be coming back on Monday morning to complete their battle for the spoils.

Talking after her elimination Park said “I think just No.18 got me yesterday and today," adding "If I shoot under par (Sunday), I should have won. That's golf."

Hataoka will be looking for her fourth win on the LPGA Tour with Lopez trailing her with only one career win.

South Korea’s Mi-Jung Hur and Canada’s Brooke Henderson finished tied in fourth on 12-under-par, one shot behind the leaders. 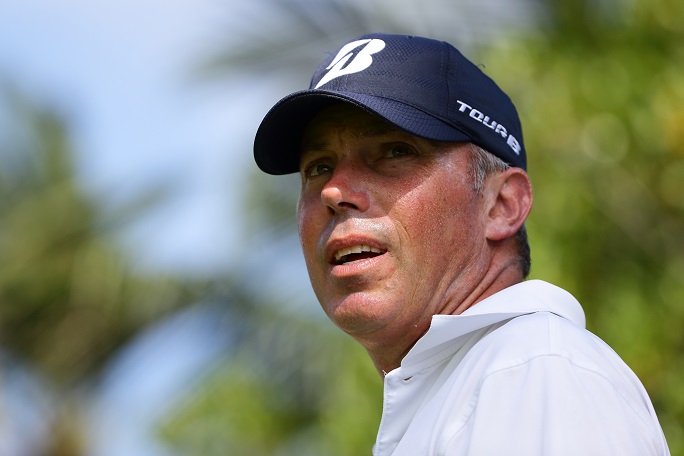 Matt Kuchar regrouped after a disaster his first nine on Sunday to take Singapore Open by three shots from England’s Justin Rose.

Kuchar had taken a three-shot lead into the final round and increased this to four shots before disasters truck at the par-five seventh hole. His tee shot ended up in the roots of a tree and he missed the ball completely with his first attempt to chop it out from the trees.

That was not the end of the Kooch’s troubles as he then pulled his approach left of the green and out of bounds. He would finally run up an ugly triple-bogey eight and see his lead all but gone.

However, the 41-year-old American dug deep steadying his round with three birdies on his back nine to comfortably win the tournament co-sanctioned by the Asian Tour and Japan Golf Tour Organisation.

“It was a thrill to be out there. It turned out to be quite a competition, much more of a competition than I was thinking it was going to be,” said Kuchar.

World number eight, Justin Rose mounted a late charge on the back nine on Sunday. The Englishman had four birdies in six holes from the 11th but his closing 67 was never going to be enough to catch Kuchar.

Jazz Janewattananond who was looking to title defend the title was never really in the hunt and the Thai finished third on 14-under following a closing 71. 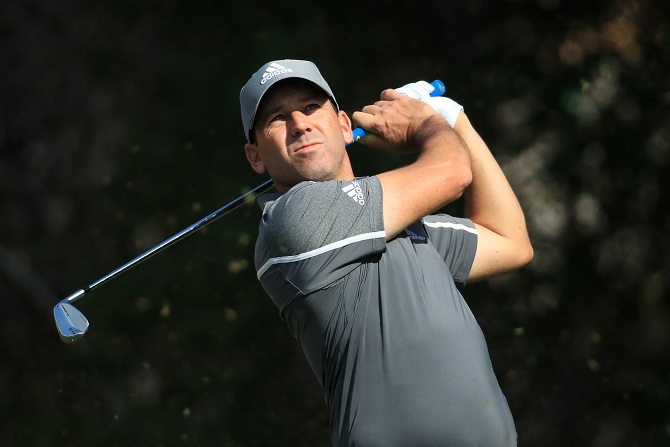 Paulina Gretzky: A Day In the Life

It's all speed boats, Top Golf and tournament wins