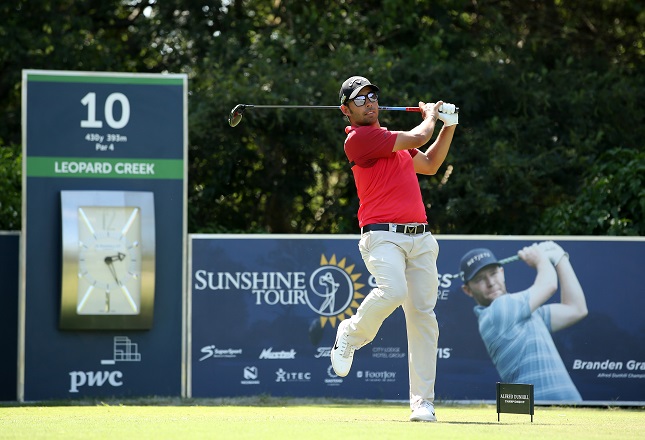 Spain’s Pablo Larrazabal somehow found a way to win the Alfred Dunhill Championship. Suffering from blisters the overnight leader ground out victory by one shot from Sweden’s Joel Sjoholm despite a car crash of a first nine holes at the Leopard Creek course.

Leading by three going into Sunday’s round the thirty-six-year-old from Barcelona was 41 to the turn, six over par for his round. However, a strong back nine which included three birdies in the last four holes saw Larrazabal stumble over the line.

The Spaniard who had problems with blistered feet stood on the eighteenth tee level with  Dutchman Wil Besseling on seven under. Sadly, for the Besseling his second shot embedded itself next to a stone wall guarding the green.

A bogey for the man from Holland saw him drop to a tie for third alongside home favourites Branden Grace and Charl Schwartzel, the former Masters champion.

Larrazabal was left to hole a three foot at the par five 18th for the fifth birdie of his rollercoaster round, a three over 75, and victory by a single shot. 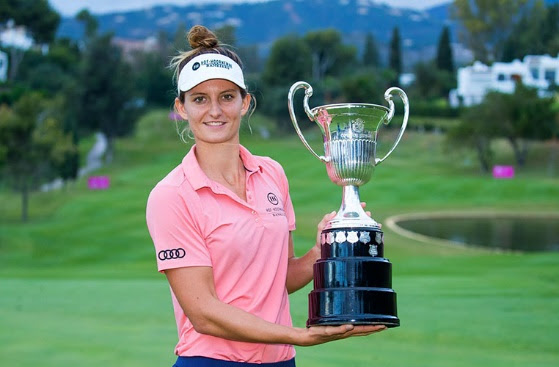 In a final hole turnaround, Anne Van Dam from the Netherlands won the Andalucía Costa del Sol Open de España for the second straight year on Sunday at the at Aloha Golf Club in Marbella. In windy conditions, a closing two under par 70 was enough to take the title by a single shot

Van Dam was three strokes behind Nanna Koerstz Madsen after the third round and the Dane was still led by one as they stood on the 18th tee. However, what followed will probably have the young Dane waking up screaming.

Madsen went with driver at the last but found a watery grave in the lake left of the fairway. To compound the error the Dane proceeded to three-putt, running up a double bogey.

The big hitting Van Dam played safe with a 4-iron off the tee and found the middle of the fairway. A good approach and safe putt to two feet left the woman from Holland a tap in  for par to seal the victory. This is the Solheim Cup star’s second win of the 2019 season, following her earlier win at the ActewAGL Canberra Classic.

“I did not expect that,” said Van Dam, 24, who has won twice previously in Spain

“That’s golf. It was a crazy day. If you would have told me at the beginning of the day that two under was enough to win, I would have said, okay, I’ll take it! It was a different day with harder conditions, a little bit of wind and it got really cold towards the end.

Madsen closed with a 74 and ended up tied for second with Aditi Ashok on 12 under and was clearly disappointed.

“I lost today; Anne didn’t really win. I played terrible and had three double-bogeys which cost me everything. On one hole, I had a wrong distance, then I pulled one and then on the last one, I played aggressively and had said that I would play driver, no matter what.”

Van Dam, the longest hitter on both the LET and LPGA Tours in 2019, took her driver out of her golf bag for the tournament, but admitted that she is keen to be reunited with it: “I’m not sure we’re going to keep that going, because I love to hit driver, but it was a different week and you didn’t need a driver much this week”

Azahara Muñoz, who won the title in 2016 and 2017, tied for fourth place with Olivia Cowan and Julia Engstrom, while Cheyenne Woods, Christina Kim and Marianne Skarpnord shared seventh.

The LET now moves south for the season-ending Magical Kenya Ladies Open, where Skarpnord is set to be crowned as the winner of the order of merit. Rookie professional Esther Henseleit is the only player who could unseat her, should she secure her maiden win. 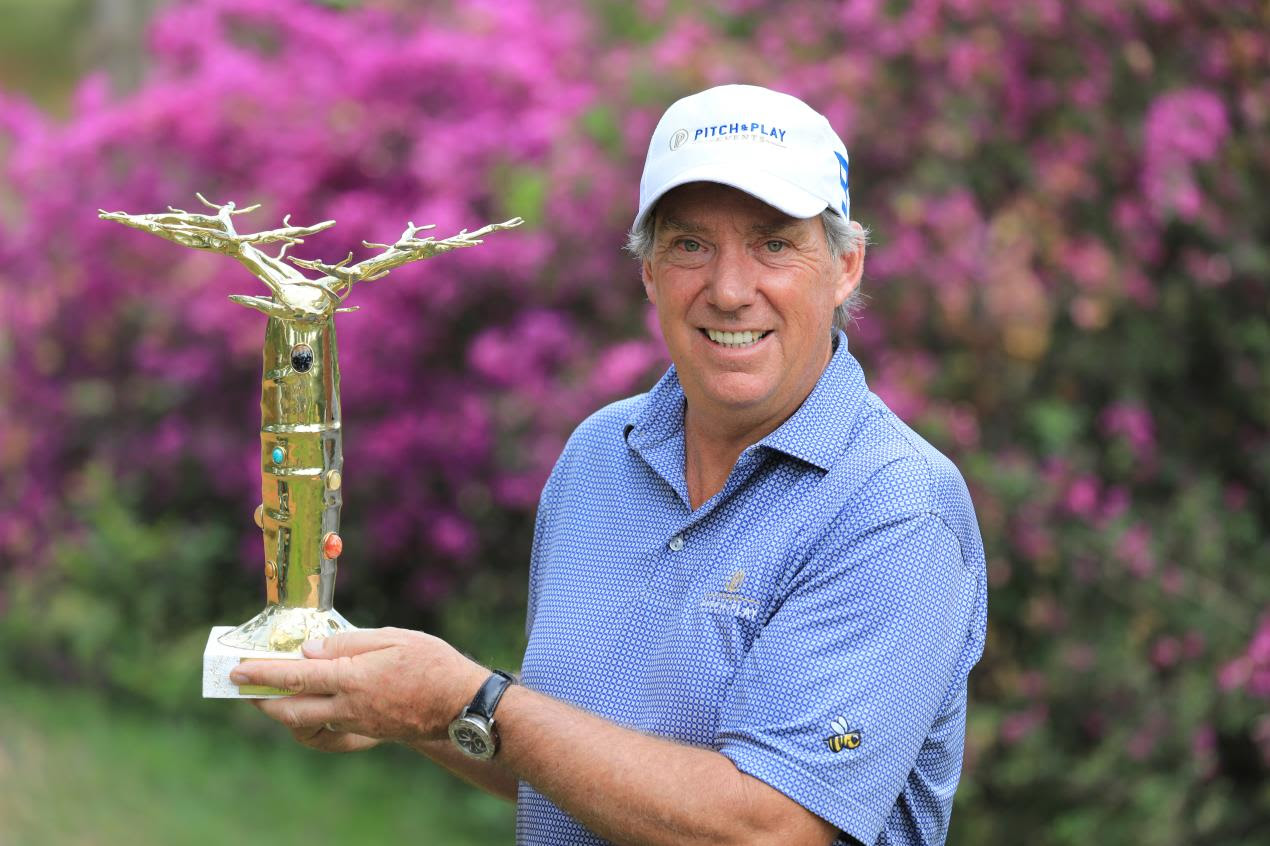 The 1993 Ryder Cup player recorded a final round of 69, two under par, as he came from four shots behind at the start of play to clinch his eighth victory on the over 50s circuit and his second of the year, having won the Senior Italian Open in June.

The Englishman began the day four strokes back from overnight leader Clark Dennis, but the American could not follow his impressive bogey free second round of 65, as Lane seized the opportunity to win the first stage of the three event final series MCB Tour Championship by one stroke.

Dennis, playing in the same group as Lane, had trouble on the home stretch as he dropped six shots in seven holes, eventually finishing in share of fourth place. Five-time European Tour winner Lane, meanwhile, picked up shots at the 13th and 15th to move into the lead.

With the clubhouse target set at two under par by Juan Quiros and Jean-François Remesy, Lane knew a par on the final hole would seal a memorable victory to become the maiden winner of the first European Tour-sanctioned event in Madagascar.

“It feels amazing,” he said. “I knew I was one ahead coming down 18 and I still tried to hole the birdie putt, but I knew I could two-putt to win, which is always nice.

“I got off to a slow start today but putted beautifully on the first four holes and then started to play quite nicely but I hung in there. Clark had a nightmare on the 15th and that changed things. This game changes so quickly and that’s the nature of it.”

Spain’s Quiros and Frenchman Remesy finished in a share of second place, following their final rounds of 69, two under par. Dennis, meanwhile, carded a round of 75 to join Stephen Dodd of Wales and Englishman Gary Evans in fourth, two strokes behind Lane.

Home favourite and local star Jean Baptiste Ramarozatovo, who was cheered on by the home crowd, recorded a round of 69 to take a share of seventh alongside Mauricio Molina of Argentina, England’s Peter Wilson and South African duo James Kingston and Chris Williams at level par. 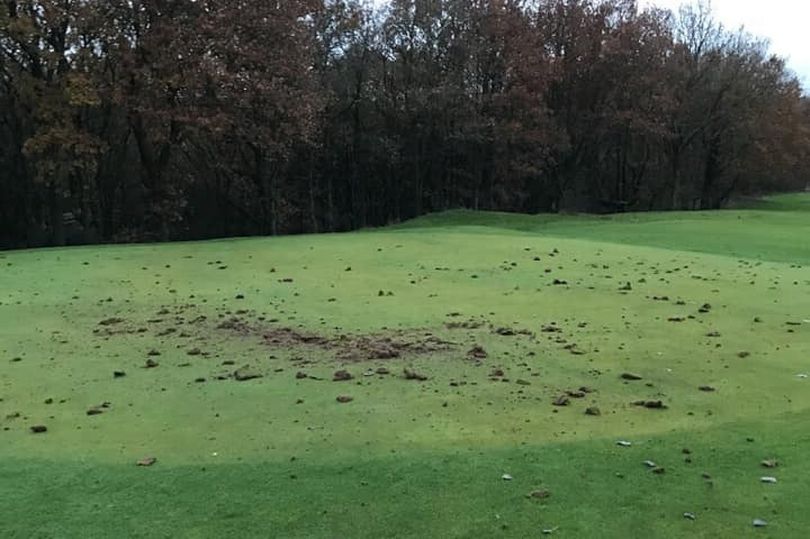 £50 paid ‘dead or alive’ for your old laser or GPS