Laura Fuenfstueck of Germany shot a four under 67 to keep the lead but is being hunted down by home favourite Carlota Ciganda who is just two shots back going into the final round of the Estrella Damm Mediterranean Ladies Open at Golf Club Terramar, near Barcelona. 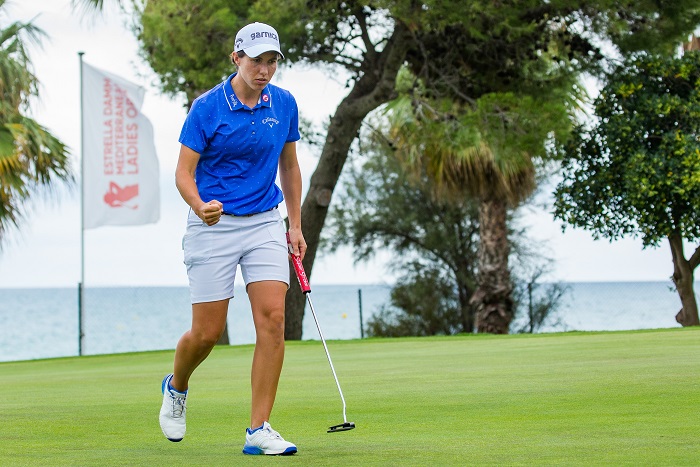 Fuenfstueck started the third round with a three-stroke lead which she extended to five strokes following  birdies at the 2nd and 5th holes. The 24-year-old German then birdied the seventh but bogeyed the 11th to slip back to eight-under.

Meanwhile Ciganda was on a charge. Four birdies and an eagle in her first 12 holes took the local favourite into a share of the lead. However, Fuenfstueck dug deep with a birdie on the long 12th hole, which she followed up with another at the 14th to get to double figures at the top of leaderboard on 10-under. 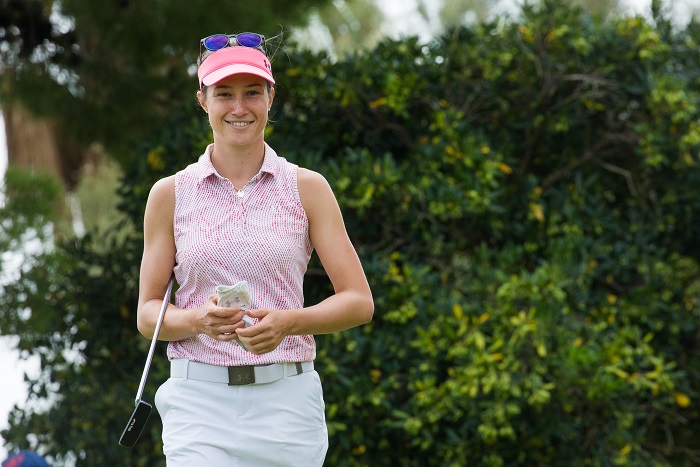 Ciganda birdied the 14th, but made her first bogey of the day on the short 15th, after failing to get up and down from the side of the green. The Spaniard birdied the par five 16th, but found the sand off the tee on the par three 17th, resulting in yet another bogey at a short hole.

Fuenfstueck may rue missing chances to extend her lead, lipping out from short range on the 17th and then missing a very makable birdie putt on the final hole.

“I had two lip-outs but some of the earlier putts that I made evened it out,” said the 24-year-old, from Langen, Germany, looking for her first professional title.

“I think the greens are rolling perfectly. Once I see the lines, I can walk up to the putt and know I’ve got it. Hopefully that continues tomorrow.” 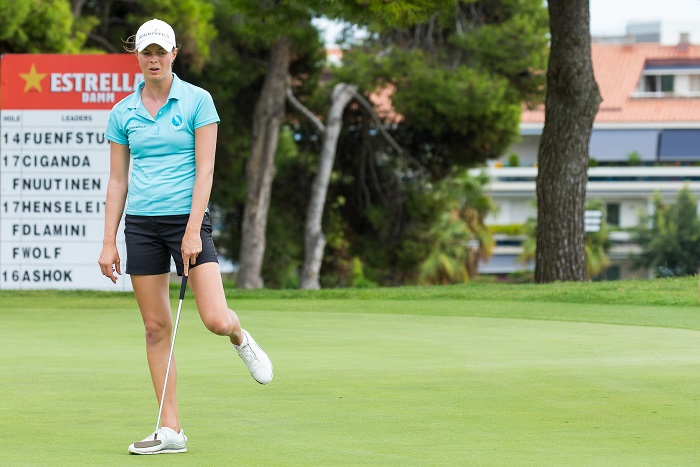 Esther Henseleit struggling with the one legged putting technique.

Fuenfstueck was not surprised to see the Spanish Solheim Cup player challenge her for the lead. She had watched Ciganda in the Solheim Cup and played with her father, Jesus Ciganda, in the Pro-Am.

“Carlota was two-under at the beginning of the day and I knew someone was going to charge at me, probably her, so I’m quite happy I’m still two ahead and I can’t wait to go out tomorrow.”

World number twelve, Ciganda was pleased with her six-under round of 65.

“I played pretty well today and made lots of birdies out there. I made some really good putts and missed a short one, but I made an eagle and three-under on each nine. I’m very happy with the score and right there for tomorrow.” said the 29-year-old from Pamplona:

“The course was very difficult and when I practised the first days, I thought the scores would be pretty high and 10 to 12-under would win it. You have to be very patient out there to make as few mistakes as possible. You have to hit a lot of greens and fairways of course: that’s what I’m trying to do.

“I would love to win. Playing in Spain is always special and my family and friends are here, the club is really nice, so hopefully I can get that win for them tomorrow.”

Finland’s Sanna Nuutinen is three strokes back at five-under-par and will play in the final group alongside Fuenfstueck and Ciganda.