Back last August the European Tour announced a four-point plan for dealing with slow play on the tour. They have now revisited the plan and beefed up the regulations and penalties. The new tougher regulations come into effect at this week’s Abu Dhabi HSBC Championship presented by EGA. 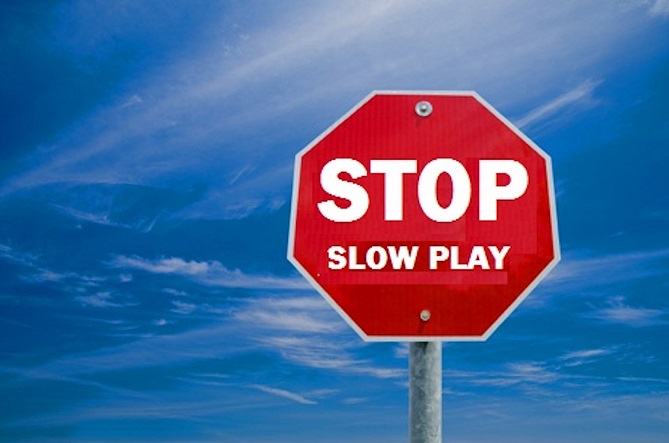 As a reminder the four-point plan was as follows:

* Immediate one-shot penalty for two bad times in a round

* Increased fines for players consistently ‘on the clock’ during the season

* Player education and technological innovation included in the overall plan

> Increased fines for players who are regularly placed ‘on the clock’ throughout the season.

> A breach of these “in position” limits will incur a “monitoring penalty” but they will NOT count towards the one-stroke penalty in a tournament, recognising the significance of being “in position”.

>A single “monitoring penalty” or single “bad time” in a season will not result in any sanction, but each one after that will incur ever-increasing fines starting at €3,500.

“Changing the regulation for an immediate one-shot penalty to now be triggered by two bad times in a tournament instead of a round will force slower players to consistently ensure they play within timing regulations.

“This is part of our wider, robust policy to tackle slow play but our fundamental advice to all players remains consistent – they should be ready to play when it is their turn.”

A new ‘Pace of Play’ timing system utilising the latest technology was tested at the BMW PGA Championship in September, with a further trial taking place in Abu Dhabi this week. The intention is to roll the system out across a number of events in 2020, providing referees with the precise times for every group through every hole to make sure that no gaps are missed. On-tee displays linked to the system will also provide the players with instantaneous information on their position in relation to the group in front

Field sizes at fully sanctioned events will be reduced from 156 to a minimum of 144 so long as all entered players in Category 18 (the final 116-132 on the 2019 Race to Dubai) and above make it into the event. This will create space for referees to push groups over the Thursday and Friday rounds, while larger starting intervals will be built into play on Saturday and Sunday to create a better flow between groups.

The proof will be in the pudding and we wait to see if the European Tour will consistently apply the new regualtions and hand down the penalties. However, this is another step in the right direction and GolfPunk applauds it.