The Battle of the Glen 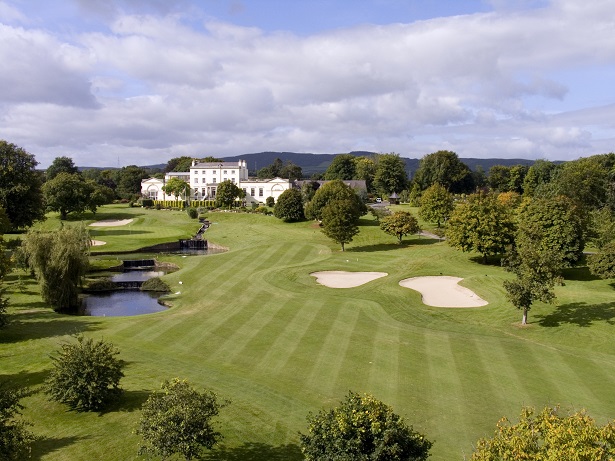 You always get a warm welcome in Ireland and the reception at the Druids Glen Hotel was no exception. A quick freshen up and a Whatsapp message home, to gloat about the lovely room I was going to have to rough it in, and it was off in search of the opposition. So where would one find a bunch of Irish journalists in a hotel? A few minutes later I was sipping my first pint of the black stuff in the Garden Room Bar. Why is it that Guinness tastes so much better when in Ireland? I was reliably informed its all about the pipes but that’s a story for another day. 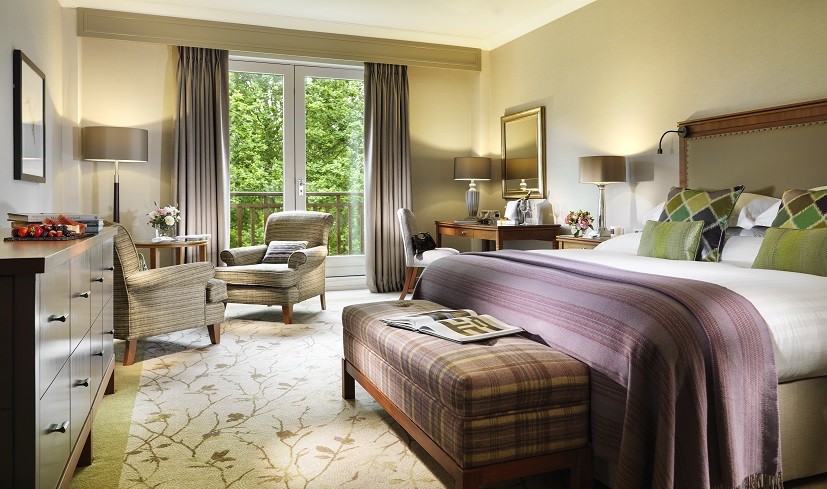 This beats the Premier Inn in Slough

After a few more polite ones and a dinner hosted by our new found friends at Stena Line we left the Irish team to hopefully drink themselves out of contention for Day 1 of the Stena Line Media Masters.

After an excellent night’s sleep, in what was a most comfy bed, there was time for a quick dip in the Hotel’s lovely pool before the teams congregated at breakfast. 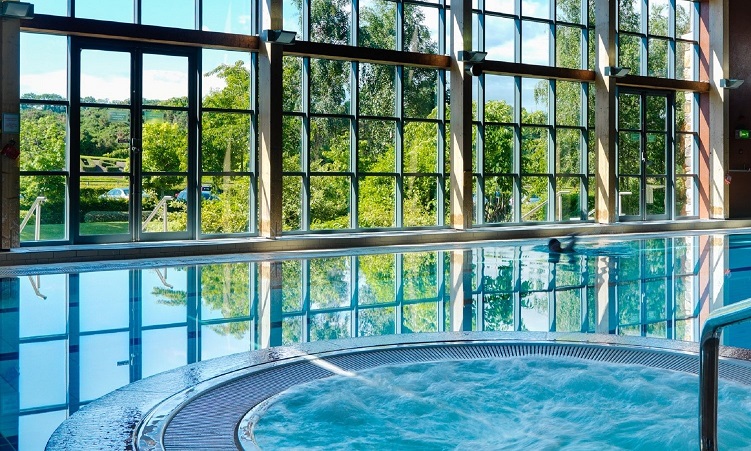 A gentile breaststroke for me – don’t want to overdo it now!

A Full Irish breakfast had to be done and it did not disappoint, although it did open up the debate as to what the difference between a full English and a full Irish was – no beans maybe? Then all aboard the hotel bus for the short hop to the Druids Glen Golf Club. I had won the toss for the shirt colour and so Team GB was bedecked in beautiful Stena Line Media Masters red shirts. 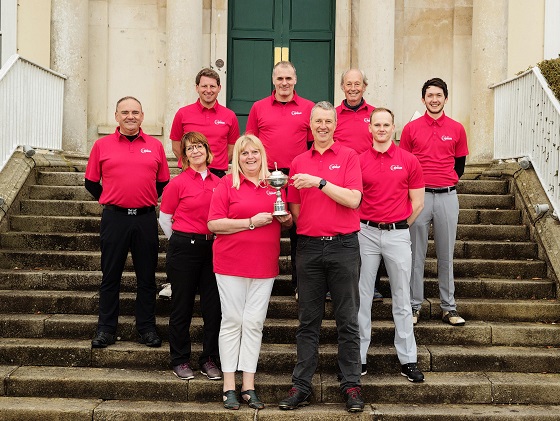 Such a fine band of players – how can we lose?

After a media scrum by the first tee, battle commenced with Team GB teeing off in the first of the four 4-ball matches that made up Day 1. I had played Druids Glen way back just after it opened in 1995 and my memory was of a beautiful and tough course. I recalled it being referred to as the 'Augusta of Ireland' and was now seeing, once again, why it deserved such a tag.

Druids Glen is a tough course and playing in early season with less run on the ball you probably want to head to the slightly forward tees. The course is arguably defined by its par 3s of which there are four, all both picturesque but tough and three over water. As the course progresses the water comes more in to play with a finish that is best described as brutal, with the par 3, 17th to an island green followed by the uphill, 400 yards plus, par 4, 18th with water protecting the green front and right. 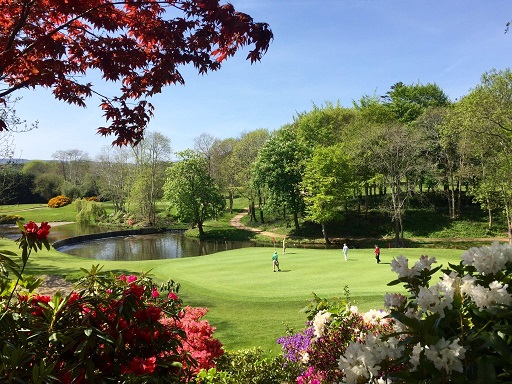 The signature holes are probably the 12th and 13th. The beautiful par 3, 12th with a tee set up high above the green and a tee shot down the hill and over water. The shrubs and plants were not in full bloom but when they are this is one of the most beautiful shots in Ireland, maybe the world. If the 12th is good the 13th is better and a potential card wrecker. A fabulous hole a good drive is required cutting off as much of the corner on the right to allow you a shot to the green over a large expanse of water. 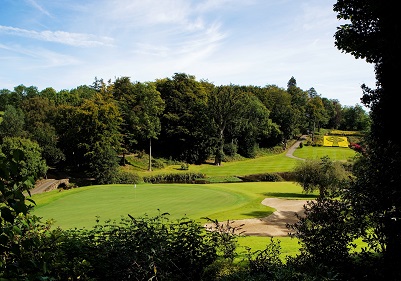 The par 3, 12th at Druids Glen with Celtic Cross in flower beds below the tee.

The 13th is where Team GB’s first pairing, featuring yours truly, let it slip. Having been under the cosh and down most of the match two fine drives and mistakes from the Irish pair set up a clear chance to level the match. Alas, it was a chance that was not taken. It’s amazing what a shot over water does to the mind and that slightest bit of doubt normally results in a watery grave! An excellent recovery by Team Ireland’s captain from deep in the trees high right led to a half in, well let’s not go there. 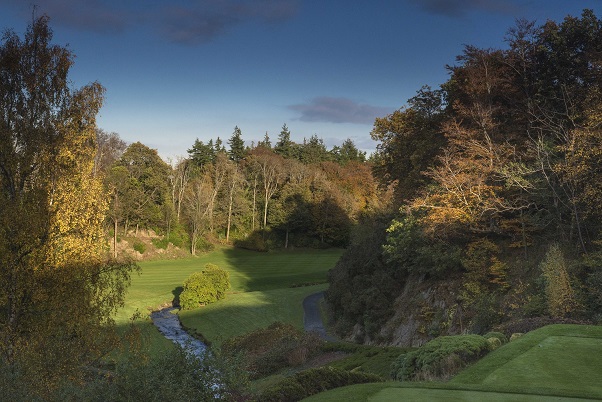 Team GB star pairing never recovered from the traumas of the 13th and it was smiles all round and a handshake at the par 3, 17th.

Druids Glen is a great but tough course and is one you really need to have played. There are perhaps a few too many blind shots for my liking and I would suggest a course guide is somewhat essential. A mature parkland course in an idyllic setting it must surely rank up there on the list of courses to play if visiting the east side of Ireland.

Team GB sadly struggled on day one. New to the course they could not match the power of Team Ireland in the first three matches. However, the secret weapon, and dream team, that was the final pair rescued some honour for the visitors. Theories that I put them out as sacrificial lambs at the back and employed a reverse psychology to inspire them to victory, are vastly over reported.

And so Day 1 ended with Team GB somewhat licking its wounds and few private Irish jigs going on.

Time to ajourn to the bar where thoughts turned to Day 2 and the come back.. 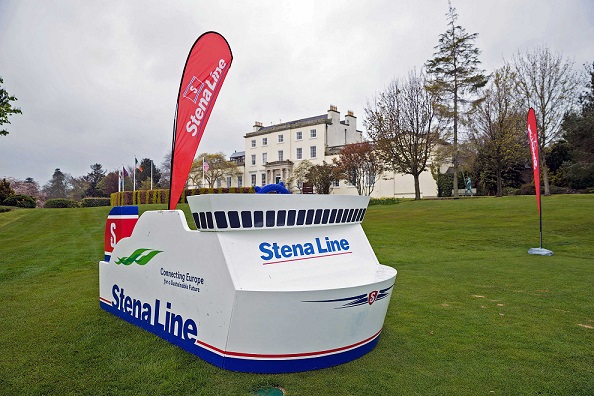 I’m not carrying it to Powerscourt!