Europe take a slender lead into day two of the 16th Solheim Cup at Gleneagles. After Europe took the morning foursomes by a score of 2½ matches to 1½, an exciting rollercoaster of an afternoon ended in the fourball matches being shared to leave Europe with an overall lead by 4½ matches to 3½. 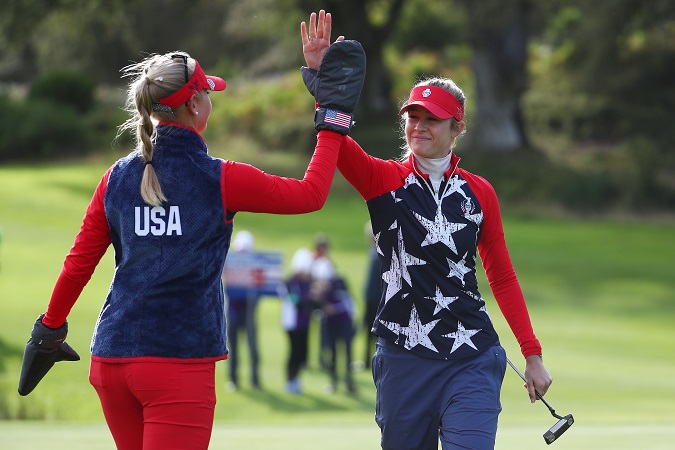 Juli Inkster will be thankful to the Korda sisters that her team are not further back.  Jessica, 26, and Nelly, 21 were the first sisters to play together in a Solheim Cup pairing when they went out in the third match of the morning foursomes. They soon repaid Inkster’s faith in them, having asked her to play them together, as they raced in to a five up lead after just seven holes. They comfortably despatched  Caroline Masson and Jodi Ewart Shadoff 6&4 to win the first point of the 2019 Solheim Cup.

Somewhat surprisingly the sisters were split up in the afternoon but both were involved in nail biting finishes on the final green and grabbed a half point each to keep Team USA snapping at Europe’s heels.

Jessica Korda and Lexi Thompson seemed to be sailing to a comfortable victory when two up with four to play against England's Bronte Law and Spain's Carlota Ciganda. However, the gutsy European pairing dug deep and took three holes in a row to take a one up lead up the final hole. However, both Europeans missed putts to win the match at the 18th and Lexi Thompson finally found her putting stroke holing from fifteen feet to clinch a half for the USA. 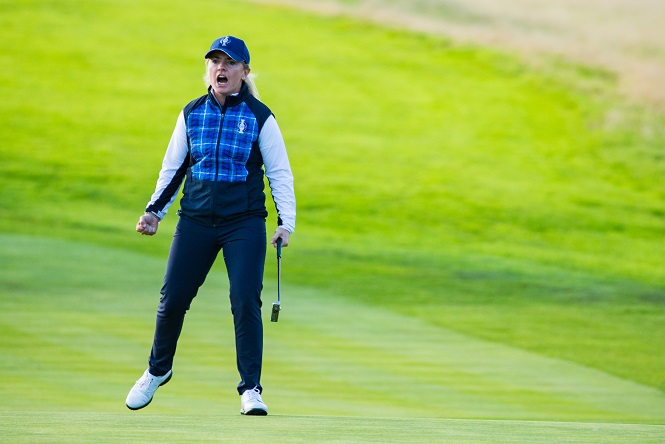 Bronte Law doing a Poults at the 15th!

The younger Korda teamed up with fellow Solheim Cup rookie Brittany Altomare in the afternoon to take on the formidable pairing of Charley Hull and Azahara Muñoz. Hull and Muñoz were looking in total control but could not shake off the Americans, in particular the impressive Altomare.

Europe were two up with two to play when at the decisive 17th hole Korda hit the pin for a tap in birdie and Hull missed a four foot putt to take the match. Altomare made Hull pay for that miss when she drained a long putt across the 18th green for another birdie and a halved match.

Elsewhere, Suzanne Pettersen and the incredibly long hitting Anne Van Dam beat Lizette Salas and Danielle Kang by 4&2. Salas was put on the clock as they took three hours to play the front nine and when the match finished at the 16th they had taken five hours and eleven minutes. One more transgression from Salas would have resulted in a one hole penalty but of course the officials seemed to bottle it again.

It didn’t help that the Salas match was first out and so held up the field. At one point three of the matches were all on the 13th hole!

"Both sides have players who don't play as quickly as you might like but the officials police the pace so it's up to them. Ideally it would be nicer to be faster on Saturday."  said Europe captain Catriona Matthew.