Continuing our series, GolfPunk looks back at some of the trend setters on the course over the years and gets the expert opinion of Stephen Doig, Men's Style Editor and Assistant Luxury Editor, The Telegraph as to 'Who wore it better'. Facing up this time are major winners from different eras. Adam Scott and ben Hogan battle it out to see to who wore the pleated trouser best of all.

The pleated trouser has been responsible for destroying many a man’s fashion ambitions. Step forward Tiger Woods, many of whom’s major wins were mildly tarnished from the waist down by not very cool baggy trousers. And it seems they are back after Adam Scott rocked up to Augusta for this year’s Masters in this outfit, a clear nod to times gone by and a certain Mr Ben Hogan. Has Scotty played a blinder, or has he drifted into an area he should be steering well clear of?

Adam Scott: The wide proportions here work well for pleats, with the result being a touch Mad Men. The trousers are oddly formal with the sporty top.

Ben Hogan: thanks to the romance of black and white, this look could have come from the MGM silver screen during Hollywood's golden age; the light tones on the trousers also show up the details on the pleats.

Verdict: Scott simply can’t compete with Hogan’s dynamic style. Nonetheless, thanks for putting pleats back on the fairways, Scotty.

Who wore it better? Plus fours. 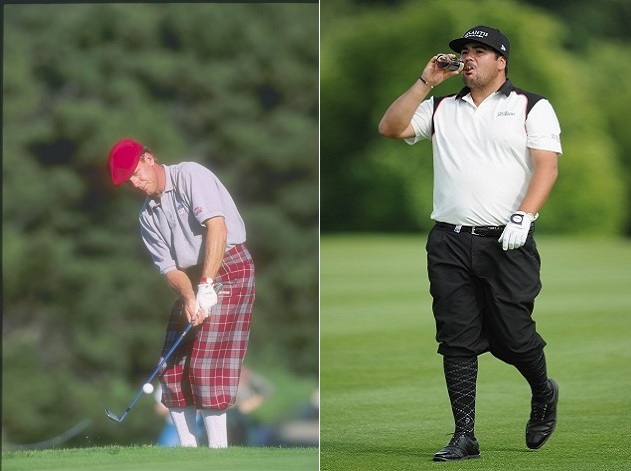